As at early afternoon

Reports are being ‘phoned in by The Other Half.

Photographs haven’t come through yet, but I am told that the lounge was factory central with a hole having been punched into the ceiling for the ducting. The plants – around 40 or so – had been removed by the police during last night’s raid, but the pots left behind.

In case you don’t know what a cannabis factory looks like, here are a couple of photographs courtesy of the Guardian Series and the Daily Mail respectively: 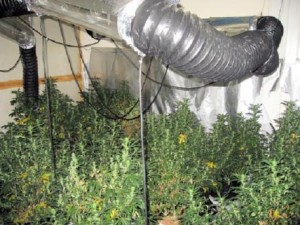 The boiler has been taken apart – obviously the perpetrators have messed around with the heating system.

Despite the property showing – so I am told – evidence of recent occupation, there is no-one around. We suspect, although cannot know for certain of course, that the tenant is enjoying accommodation at HM’s pleasure at the moment.

Our natural conclusion, also the recommendation of the police, was to secure the property and change the locks. However, this raised another question: where the heck do we stand on this legally? With no tenants around, does the landlord actually have the right to change the locks?

I probably don’t need to explain my first thoughts in answer to that question. They’re not printable.

However, my unprintable thoughts are not going to stand in a Court of Law. So, faced with a bit of a conundrum, we decided on the lesser of two evils – The Other Half contacted the locksmith who is due to arrive mid-afternoon. The locks will be changed.

In the meantime, we also agreed to get advice, so I’ve just come off the ‘phone to our property lawyer, who has confirmed that changing the locks is the way to go. Even if the tenant were to complain, “any judge in his right mind” he considered, is unlikely to find in favour of the tenant in this case after rather a serious breach of the terms of the contract.

As well as the locksmith, the agent is coming down to have a look later on this afternoon.

One thought on “Landlord’s Nightmare – Update 1”